I am selling these at the CCAD art fair tomorrow. Along with some of my pottery and some other small sculptures. Things! Presents! Wine! 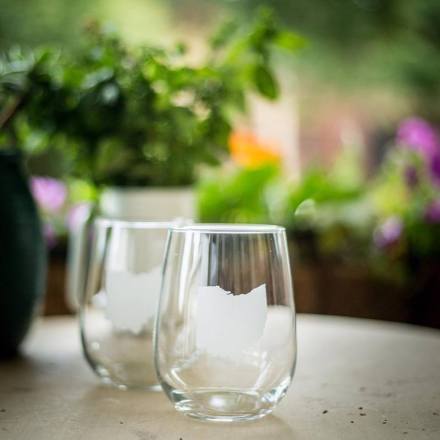 Good news, everyone! I have finally found a studio space that is not my basement. Huzzah. Thanks to a combined effort, there are a good number of recent graduates from CCAD (both BFA and MFA) who have studio spaces. Almost. They are putting up walls as I write this. Probably. I’m not over there watching like a creeper. Now I’ll have a space to make and a space to shoot. And a place to put all my clay so I don’t look like a hoarder. I also sold a couple of boxes. Yay for making money with art. More for sale. I’m putting a paypal button on my site. Buy my stuff.

Well, I almost have my degree. One more week. I just have to go and get the name tags out of the kiln. And organize my studio in which I have to find room for all my work. Hmmmm. There may be a bit of stacking. At least my boxes are square. That helps. There will be documentation of everything here soon. Including my thesis paper. Not that any of you want to read more of my ramblings, but it’ll be there. And if anyone wants to buy a box, let me know.

Thom and I will have our animations shown in the Canzani Auditorium this Sunday at 11:45 am at the Animation Roadhouse. Thanks to Charlotte Belland for putting that together. And on Monday, as part of ASPECT, my micro-animation-film will be shown at 7pm at the Gateway Film Center ($5 tickets). Yay!

It’s almost over and done with. The show has been up for three weeks, my oral defense went well (and Nicole came up with a new term for what I do: a ceramic behavioralist. Haha! )Malcolm also mentioned that before I pack everything away, that I rearrange the arrangement of the boxes and see how far I can push them as sculptures inisisting that they are fragile. I should also send a notice to Columbus Alive that they miss-represented my work. They are not metal, dammit. But that was kind of the point. I’m working on my paper and animations. I’m going to try and get into festivals as well as galleries. We’ll see. I did not get into Ohio Shorts. Blah. There are a few more that I will apply to, thanks to Tracy’s http://noentryfeefestivals.com/ blog. And pictures as promised. 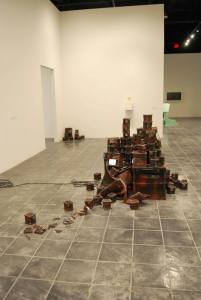 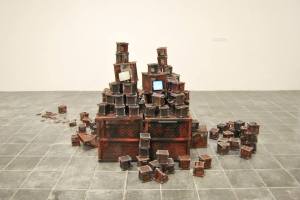 I sat with my work earlier today, listening to Sigur Ros and trying to drown out the ambient noises. It kinda worked. Wrote some new realizations down, legs fell asleep, took some pictures, realized that it was raining, walked around a bit, and finally saw pieces and installations that I hadn’t seen on Friday.  Looks good, guys. Impressive, even.

I’ll post pictures of my install later. Don’t want to spoil the surprise for anyone who hasn’t been in the gallery. *finger pointing*

Still working on stuff. You’d think that there would be some sort of lull, but nope. Animating and editing those damn paper puppets. Writing on the thesis paper. And making more things out of clay. Hopefully I’ll have one more firing before graduation, just to finish everything. Loading and firing an electric kiln is so much easier than firing my woodfire kiln. Not nearly as fun, but so much easier. There was an idea about naming all the boxes that Charlotte had mentioned a while back. I’m working on that. These bits will somehow be added to the boxes. It’ll make sense later. Thinking on what to do next, is that supposed to be the whole idea?

I’ve been doing a little animating downstairs and have enjoyed watching Toby Hale put together his Transformers display and curse at the led lights in between takes. I’m not sure how many of these will make the final cut. I will continue to animate until my eyes are bleeding, I’m swearing like a sailor at everything, and my brain shuts down from not enough sleep.  Then, after a nap and a coffee, I will edit the final two cuts. I’ve also decided against the static. It’s a bit too literal and is too reminiscent of last year. Instead, I will invoke the time honored tradition of giving people something to stare at while they wait:

Some people have already begun. I have a simple install and a couple more days to finish everything. Then install, sleep, dinner with my parents, and then the opening. And lots of drinking! Hahahahaha!

And the next bunch of craziness to edit:

I went to the thrift stores yesterday and, aside from the numerous versions of Trivial Pursuit, found two more working mini t.v.’s. They are about to be shucked and placed inside the boxes. This one has poor picture quality and may be disqualified, but we’ll see. It could be a different take on watching the animations. To what lengths will people go to watch t.v.?

I also submitted my microfilm (anything I make that is under 8 minutes should be considered a microfilm. Calling it a short seems too presumptuous)  to Ohio Shorts at the Wexner Center for the Arts this morning. Fingers crossed. I added music. Turn up the volume dear readers. Hopefully it will be accepted. Or a least make the judges giggle. Which is the whole point, in the end. Right? 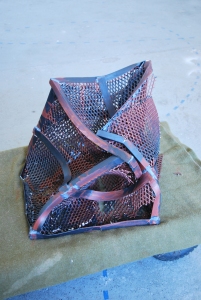 Well, this wasn’t supposed to happen. To plan B! But it is pretty.

Goodbye Sir Terry. I will miss you greatly. The world is now a much poorer place. 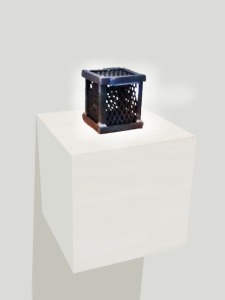 Pop quiz. What is this material?

Time’s up. Hand in your papers. I’ll grade these tonight.